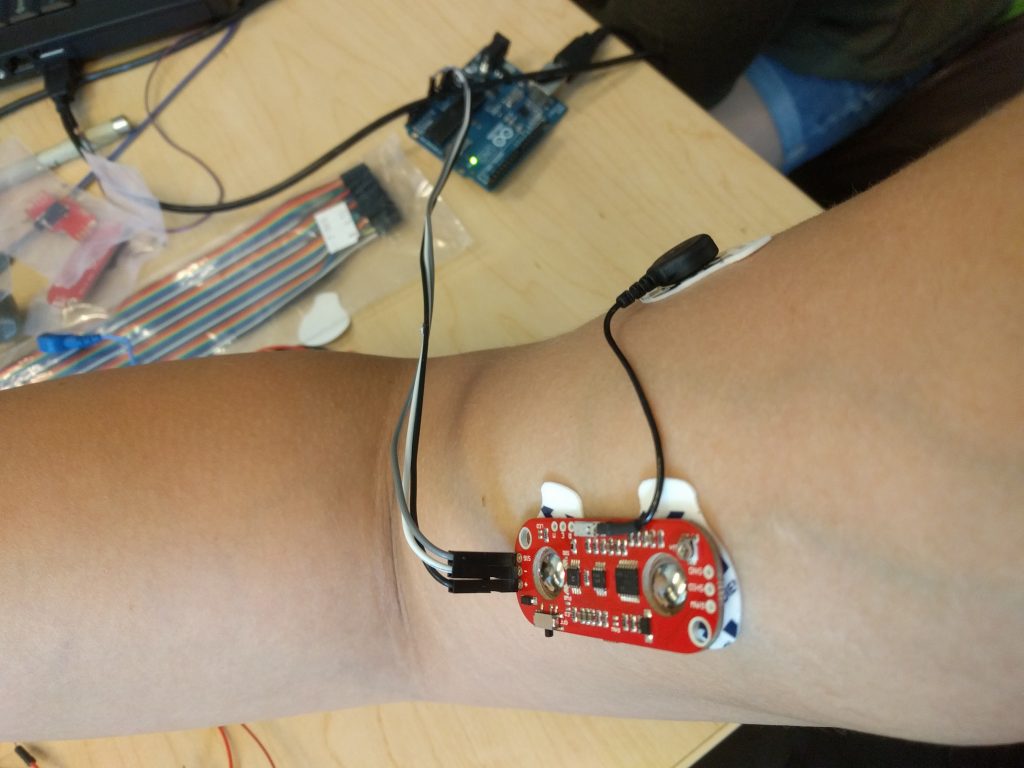 The Muscle Minder is a device which squeezes a muscle using a twisted actuator before doing an exercise. It is using haptic cueing for focusing on muscles during location specific exercise. This case study was originally published at https://idemolab.madebydelta.com/portfolio/3659/?id=569

Working with the SPIN Haptics Lab (Sensory Perception and Interaction) from the University of British Columbia, IdemoLab explored the potentials of using haptics in sport, lifestyle and wellness. The case study of mind-muscle connection was chosen as it is generally applicable to people who are doing exercise in fitness centres but is also potentially useful in a rehabilitation context.

Supervising the project was SPIN Lab Director Karon MacLean: Professor of Computer Science and the team for this project consisted of:

We asked the question: “What is the effect of haptic cueing on mind-body awareness before / for muscle preparation and activation (exercise)?

” From several studies, though most notably Calatayud, J., Vinstrup, J., Jakobsen, M.D. et al można znaleźć na tej stronie. 1, we learned that there is a 20-60% increase in EMG signal when focusing on muscle in weight bearing exercise. We wanted to explore the effects of using a tangible, non-screen device so as to focus on the body and not divert attention to a visual display. By using twisted actuators:

we give people a squeeze, which is similar to other products such as tension bands used during exercise to create muscle awareness and focus. Therefore there is pressure, but it is not entirely distracting.

Insights After interviewing an expert in the field, a Clinical Assistant Professor at the Faculty of Medicine | Department of Physical Therapy at the University of British Columbia, we learned that:

Physiotherapy treatment is dynamic, and there is a constant feedback loop between physiotherapist and patient.

One should think about the Homunculus, which body parts we can feel / are aware of the most. It was suggested to us that the back of the body has very poor representation and people are much less aware of muscle activity they can’t see.

Evaluating the prototype and experience

We conducted a series of evaluations with 6 people in which we first obtained a baseline of data, what EMG signal do we get with no activity, with a bicep curl, and then with focusing on the muscle and doing a bicep curl. To reduce bias, we randomized the tests so testers did not know which ambition we had when we asked them to do a bicep curl or to focus and then do a bicep curl. Our procedure was:

We could clearly see when a bicep curl was being done:

And having people focus on their muscles and providing them with a cue before each movement showed higher averages compared to continuous cueing or no cue. Here are some example outputs:

Bicep curl with haptic cue and no focus

Focus on muscle without haptic cue

We see a potential here for working with a company to develop ‘smart workout clothing’ which helps people focus on their muscles during exercise. This could be extended to rehabilitation exercise routines. We see the need to measure EMG and see if it goes below a certain range, indicating that the exerciser is losing focus, then they get a little cue to remember to focus. And we could begin to see trends of when their attention begins to fall and help them to stay focused and stay above some threshold.