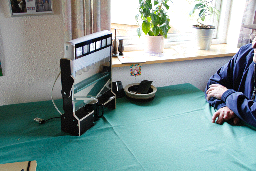 A 7-month in-context study identifying how citizens on Bornholm might benefit from an automated in-home pill dispensing and medication reminder system.

As a progression from the work done around the Intelligent Pillbox, Vanessa, as a part of IdemoLab, DELTA worked with a number of partners on a LevVel project exploring the possibility of creating an all-in-one home pill dispensing solution.

Through several rounds of design research and evaluations with elderly people living on Bornholm, the concept was sketched and evaluated in the homes of the participants in a co-creation process with the elderly and the municipality.

Examining how people currently store and taken their medication was fascinating and very revealing, some are very private, and others were eager to share their unique method of storing and taking medication. Their home-made solutions were enlightening to our study.

The prototype had to accommodate many parameters including:

To explore and fully understand the problem area, several rounds of workshops were conducted wherein we interviewed and explored with home nurses, the pharmacy, the municipality, elderly people who would use such a system, and the project partners.

The prototypes were built in two rounds, first, testing individual functionality of various parameters (reminders, additional non-pill medication), and second, evaluating the impact of the entire system in the homes and lives of the people who would be using it.

This project completed with a final prototype and user experience report, which was then taken by the project partners for further development.